The long-term research vision in our research group is to utilize multidisciplinary knowledge in chemistry, materials, biology and medicine to develop polymeric biomaterials with defined topology, composition and functionality, and eventually translate  them from bench to clinical settings. Our clinical targets are recessive dystrophic epidermolysis bullosa (RDEB) and Parkinson's disease (PD). 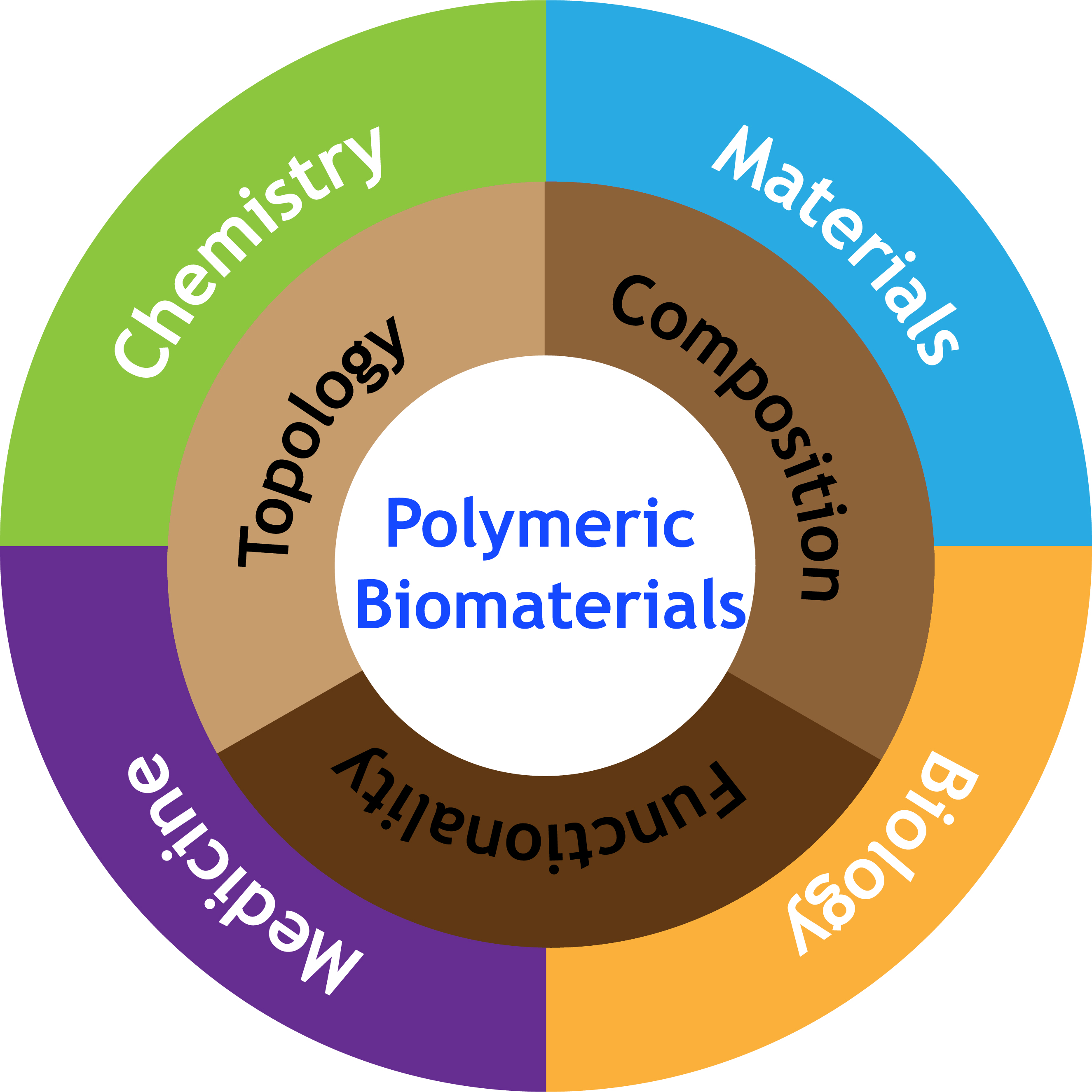 Our research interests are mainly focused on:

Non-viral gene therapy holds great promise but has not delivered treatments for clinical application to date. Lack of safe and efficient gene delivery vectors is the major hurdle. Among non-viral gene delivery vectors, poly(β-amino ester)s are one of the most versatile candidates because of their wide monomer availability, high polymer flexibility, and superior gene transfection performance both in vitro and in vivo. However, until 2015, all research had been focused on vectors with a linear structure. A well-accepted view is that dendritic polymers have greater potential as gene delivery vectors because of their three-dimensional structure and multiple terminal groups. Nevertheless, the synthesis of dendritic polymers has been proven to be a well-known challenge. In 2005, we proposed the design and synthesis of highly branched poly(β-amino ester)s (HPAEs) via a one-pot “A2 + B3 + C2”– type Michael addition approach. We found that the branched structure can significantly enhance the transfection efficiency of poly(β-amino ester)s. We further optimized HPAEs containing biodegradable disulfide units in the HPAE backbone and guanidine moieties at the extremities. The optimized polymers were used to deliver minicircle DNA to multipotent adipose derived stem cells (ADSCs) and astrocytes, and high transfection efficiency was achieved. The top-performing candidate mediated high levels of nerve growth factor (NGF) secretion from astrocytes, causing neurite outgrowth. Moreover, we further demonstrated that HPAEs can correct genetic defects in vivo using a recessive dystrophic epidermolysis bullosa (RDEB) graft mouse model. Building on our previous work, current research efforts on this topic are targeted at three specific challenges: 1) rational design of other dendritic poly(β-amino ester)s and evaluate their gene transfection properties; 2) build up the correlations between the topological structure and gene transfection performance of poly(β-amino ester)s; 3) decipher the mechanisms behind the enhanced gene transfection performance of poly(β-amino ester)s by different topoloical structures.

mRNA is the template for the synthesis of proteins. The vast amount of research done at a molecular level has revolutionized mRNA as the new therapeutics. Unlike plasmid DNA based gene therapy which has been established for many years, mRNA based therapeutics are still in their infancy. Compared to DNA, the use of mRNA in gene therapy has multiple advantages. Firstly, since mRNA exerts its function in the cytoplasm, its activity will not depend on nuclear envelope breakdown which is involved in DNA based gene therapy. Secondly, given its site of action, mRNA therapy does not necessitate genomic integration and thus would only raise the low potential of risk of insertional mutagenesis that viral based gene therapy has been plagued with to date. Hence, mRNA has a significantly higher safety profile than DNA in gene therapy for clinical applications. Furthermore, mRNA gene therapy circumvents the need for selecting a specific promoter, and thus the transfection process is relatively efficient and facile. Finally, regarding the production process, raw material synthesis and the product quality of mRNA can be standardized more easily than for DNA, which gives rise to mRNA based gene therapy with an additional advantage in reproducibility. Nevertheless, challenges associated with the application of mRNA gene therapy still exist, especially the inability to deliver therapeutic mRNA into cells efficiently. Since mRNA is a type of large poly-anionic molecule, it cannot cross cellular and tissue membranes directly and can be degraded easily by nucleases. Despite the considerable attention and focus that mRNA based gene therapy has garnered, relatively few kinds of materials have been proved to be effective mRNA delivery vectors, directly adapting DNA or siRNA delivery vectors as mRNA vectors does not translate into effective mRNA delivery. Therefore, our efforts on this project are to develop reliable mRNA delivery systems to accelerate the translation of mRNA gene therapy from bench to bedside.

Seventy years ago, the Flory-Stockmayer (F-S) theory has predicted that the polymerization of multivinyl monomers (MVMs) would inevitably lead to gelation, even at a low monomer conversion (typically <10%), which has been verified by experiments repeatedly, therefore since then the polymerization of MVMs has been considered uncontrollable and the use of MVMs has largely been limited to as cross-linking agents. More recently, however, polymerization strategies such as reversible deactivation radical polymerization (RDRP) have paved the way for the exploration of new possibilities in the polymerization of MVMs, in terms of both polymer architectures and functional capabilities. By kinetically controlling the propagation of the polymer chains such as growth boundary (kinetic chain length), dimension and the concentration, the gelling point can delayed to a high level of monomer conversion and the two distinguished macromolecular architectures can be achieved: by selectively promote the inter-chain crosslinking while suppressing intra-chain crosslinking, hyperbranched polymers can be synthesized; in contrast, by selectively promote intra-chain crosslinking while suppressing inter-chain crosslinking, single-chain cyclized polymers can be synthesized. These studies have opened the door for the design and large-scale preparation of highly functional new polymer architectures. Our continued study on this topic will be: 1) mechanistic understanding of the RDRP of MVMs; 2) structural manipulation and topological effect investigation of polymers synthesized by the RDRP of MVMs; 3) exploration of biomedical applications of the synthesized polymers in tissue engineering, polymer coating and gene/drug delivery etc.