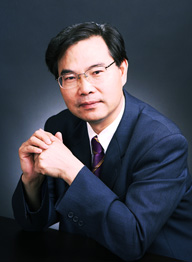 Academician of the Chinese Academy of Sciences

Zongben Xu was born in 1955. He received his Ph.D. degrees in mathematics from Xi’an Jiaotong University, China, in 1987. His current research interests include applied mathematics and mathematical methods of big data and artificial intelligence. He is owner of the Tan Kan Kee Science Award in Science Technology in 2018, the National Natural Science Award of China in 2007，and winner of CSIAM Su Buchin Applied Mathematics Prize in 2008 . He delivered a 45 minute talk on the International Congress of Mathematicians 2010. He was elected as member of Chinese Academy of Science in 2011.


His current research interest includes intelligent information processing, machine learning and theories in numerical modeling. He proposes the L(1/2) regulation theory, which serves as foundations for sparse microwave imaging. He also discovers and proves Xu-Roach Theorem in machine learning, which solves several difficult problems in neural networks and simulated evolutionary computation，and provides a general deduction criteria for machine learning and nonlinear analysis under Non-Euclidean framework. Lastly, he initiates new modeling theories and methodologies based on visual cognition, and formulates series of new algorithms for clustering analysis, discriminant analysis, and latent viable analysis, which have been widely applied to science and engineering. He is owner of the National Natural Science Award of China in 2007，and winner of CSIAM Su Buchin Applied Mathematics Prize in 2008. He delivered a sectional talk at International Congress of Mathematicians (ICM 2010) upon the invitation of the congress committee.


Zongben Xu was the vice-president of Xi’an Jiaotong University. He currently makes several important services for government and professional societies, including the deputy director for the Department of the Information and Technology Science of the Chinese Academy of Sciences, director for Pazhou Lab (Guangzhou), director for the National Engineering Laboratory for Big Data Analytics, a member of National Big Data Expert Advisory Committee and the Strategic Advisory Committee member of National Open Innovation Platform for New Generation of Artificial Intelligence.